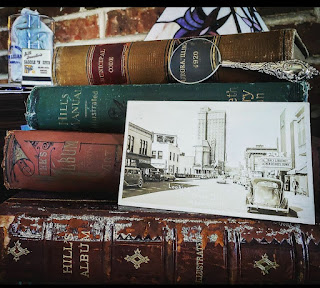 This page is dedicated to the items in my Aurora History collection. I take great pride in finding as many items pertaining to local Aurora history, be it Leland Hotel, East Aurora and West Aurora schools, vintage books by local authors, photos, etc. My belief is when I find a special item, it should be my duty to "bring it back home". I try to save as much as I can. It is hard sometimes financially but I do try my best. There are several items too that have been donated to my collection as well. I want to thank the folks who so kindly donated yearbooks, photos and books to my collection and know that they are in good hands and are well taken care of.
Here are some of the items that are in my collection.
How it all started::
Back in 2018 I started to find Leland Hotel postcards and matchbooks on Ebay. Since I was writing a Historical Fiction book that centered on Leland, I thought it would be a great hobby to find Leland items. Then I started to find other items that interested me. There were times I would see posts on local Aurora history pages on social media about certain books by local authors and I would look up to see if they were available to buy. Lo and behold, a good majority were available to purchase.

Vintage Yearbook Collection:
East Aurora High School Yearbooks (not for sale)
1910s
1920s (complete collection)
1930s
1940s
1950s (complete collection)
1960s
1970s
1980s
1990s
West Aurora High School Yearbooks (not for sale)
1910s
1920s
1930s
1940s
1950s
1960s
1970s
1980s
Stillman Freckle Cream and Ephemera:
City of Aurora Phone Directories:
Paul Egan Collection
Mayor Paul Egan is now part of the Tracy Duran Collection! (sans the telephone and radio... that's my personal collection but it fits!) Several letters between Mayor Egan and his wife Patricia and a few others. The orange campaign cards read "A Message from the Sky... Don't let them fool you again!" Paul Egan for Mayor". I had found that these little orange cards were dropped from an airplane flying over Aurora Downtown and the surrounding area of downtown. The fellow never did anything small, that's for sure!.
The center photo is of Mayor Egan calling from a Chicago hotel phone trying to get a hold of President Eisenhower when he was in town (never got through).
The newspaper on top of the radio is one that Mayor Egan personally published even before he was Mayor of the City of Aurora. "The Economist" is filled with many interesting opinions of Mayor Egan of how the city should be run and calling out others on how bad of a job they were doing... his opinion of course.
Lastly, his datebook from 1957... mostly filled with bridge game dates.. nothing extraordinary but hey, who doesn't like a good game of bridge? LoL!
I hope you enjoy this little snippet of my Mayor Paul Egan collection. More to come soon! 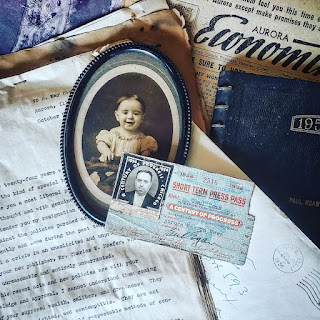