Getting Closer to the Grand Opening of Leland Hotel! 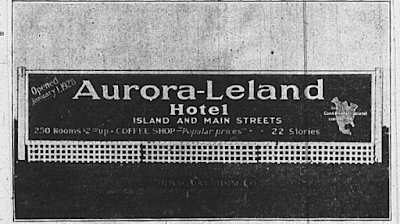 As time gets closer to the official grand opening of Leland Hotel, there is a sense of excitement in the air! Everyone can't wait to see what type of grandeur is to behold inside this towering 22 story building. Being that the architects and designers usually create wondrous and gilded theaters, having a structure so grand had to have been awe inspiring.  In the Beacon News on February 7, 1928,  just a few days before the grand opening, it is sprinkled with all sorts of advertisements and articles about the building. 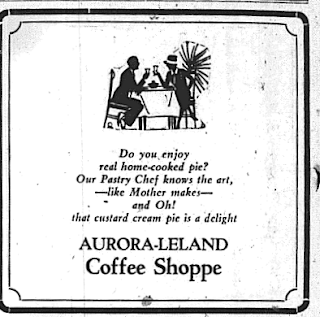 All of Aurora was buzzing with excitement
over the Grand Opening of Leland. The city had its fair share of hotels, restaurants and entertainment at the time but this, the gem of the Midwest, the tallest building around, had everyone in awe of its grandeur. This was before the Empire State Building and the Chrysler Building in New York! These two buildings opened just a few months later but for that short period of time, Aurora was home to the tallest building outside of Chicago.

The following an excerpt from the Beacon News article from February 7, 1928::

The Hotel Opening
"There is going to be a brilliant party tomorrow night atop the new Aurora-Leland hotel, marking its formal opening. The program, the spirit of the occasion, the fascinating view of communities for miles around, twinkling in the dark far below, will be in keeping with the beauties of the 22 story tower. Whether one goes to see or hear or take active part he is certain to have a good time. The building, which with its site represents a $1,300,000 investment, is the highest in the sate outside Chicago. It is of steel and brick and stone.Its foundation piers reach far down in the rock. To go into it gives one a feeling of security.
Naturally with its great steel frame and stone coat the building is fireproof. It is good to the eye too with its ornamental brick and stone trimmings, rich woods and furnishings and softly glowing chandeliers. The Sky Room is a kaleidoscope of colors. The site of the hotel in the river's edge is ideal. The view up the beautiful winding Fox is more than intriguing and the waterfall over the great concrete dam to the right adds a pretty touch. The washed air is free from dust and rooms will be so cool in summer, the electric fan and refrigeration will seldom come to mind. 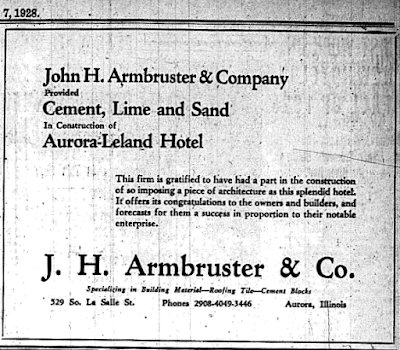 Owners have reason to take good pride in their house and the elaborate provisions they have made for their guests. Anyone who cannot find comfort there cannot find it anywhere. For a conscious effort to make the hotel a cozy place has been entirely successful.
It is one of six now operated by the Continental-Leland corporation which has headquarters at Detroit. The six are located at Detroit, Lansing, Birmingham, Mansfield, Sedgefield, N.C. and Aurora. It is the aim of the company to add at least one new hotel to its string each year.
The president of the firm, Edwin R. Sweet, will be at the party and will make an address. So no doubt will the manager of the house, W.H. Byron, who has won many friends here by the pains he has taken to acquaint himself with the environment of the community and plans he has made to help in the development of the community. Speaking for Aurora wil be Senator Kessinger and the Reverend Joseph Clare and Herbert Heiss, who had the dream of the hotel and made it come true. The talks will not be long but will be of good cheer and abundant with. They should hold as much interest as the exceptional program in the way of song and dance and play."

Coming next.. the grand tour at the Grand Opening!... 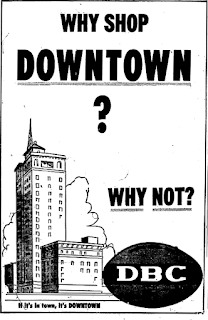