Before he was President but after he was Vice President...

Another famous visitor to Aurora!

A huge thanks to Dick Elliot, an awesome Facebook friend who has a wonderful memory of a lot of Aurora events. He had brought up in one of the Aurora history groups on Facebook that Richard Nixon had come to Aurora in October of 1964. So, obviously, I took on the challenge to go through the microfiche at the Aurora Public Library to see what I could find. Yes, I love doing "old school" research and go through all of the old newspapers there.

So, why was Richard Nixon in Aurora? Mrs. Eleanor Bentson (president of the Aurora Republican Women's Club), wife of Ralph Bentson (vice president of Bentson Manufacturing), while a at a recent convention of the National Federation of Republican Women had arranged for the former Vice President's appearance in Aurora. He came to Illinois to help with the Presidential campaign of Arizona Senator Barry Goldwater.

Nixon had flown in from Mattoon to DuPage County Airport and came to the Aurora Republican Headquarters located at the corner of Downer and Broadway (then Fox and Broadway) where the parking lot of the Merchants Bank is now. Nixon was accompanied by Dale Grubb, an aide; William Strand, press manager and Robert Hill, former ambassador to Mexico. Also accompanying Nixon was Charles H. Percy, candidate for governor of Illinois and later on served as a Republican U.S. senator from Illinois from 1967 until 1985 (being defeated by Paul Simon).

Richard Nixon made a half-hour address at the rally at the Republican Headquarters to 500 Republican party workers. He spoke of Lyndon B. Johnson's foreign policies, which, in his words, were failures. Nixon also mentioned that Barry Goldwater was a "calm, reasonable man."

Nixon planned on making 150 speeches in 36 states between this rally and November 3rd, 1964.

Below are the Beacon-News clippings of his visit: 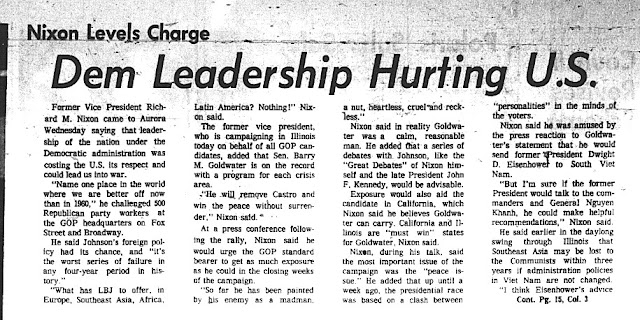